Tokyo – Assisted reproductive technology is commonly used to treat human infertility, but the rate of successful pregnancies is low (around 30%). One reason for this is the failure of embryos to implant in the uterus. Embryonic implantation is a complex process that must occur within a short time window when the lining of the uterus is receptive. Although signaling pathways and hormones from the ovary are known to be necessary for pregnancy to establish, the molecular mechanisms underlying this are unclear. An international team led by Tokyo Medical and Dental University (TMDU) has now revealed that expression of the protein Sox17 is required for uterine receptivity and embryo implantation in mice. The study was reported in Scientific Reports. 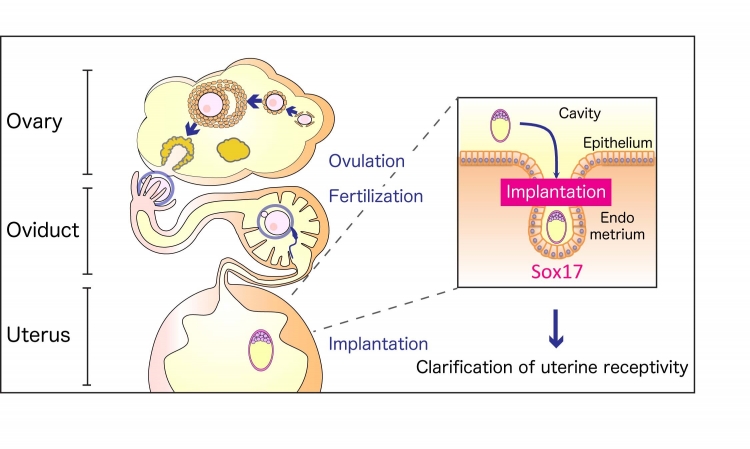 Implantation in the uterus occurs on the fifth day of embryo development in mice, and is essential for progression beyond the blastocyst stage. The maternal hormones progesterone and estrogen regulate uterine receptivity in both humans and mice, while the Sox17 protein is known to be expressed during implantation in the uterine lining, with possible roles in progesterone mediation and blastocyst attachment.

TMDU-led researchers confirmed this expression of Sox17 in mice, and also detected slightly lower levels of Sox17 expression in the oviduct and blood vessels. Female mice carrying a mutation in one copy of the Sox17 gene had lower fertility levels than control mice.

“Sox17 heterozygosity had no adverse effect on ovulation, fertilization, or the morphology of the uterus,” first author Yoshikazu Hirate says. “However, we observed defective implantation in these females, resulting from fewer implantation sites.”
The team predicted that the reduced implantation occurred because of a shortage of Sox17 gene product, so-called haploinsufficiency, although some mutant females were unaffected and had normal litter sizes.

“This suggests that a protein similar to Sox17, such as the related Sox7 or Sox18, is compensating for its absence in these cases,” corresponding author Masami Kanai-Azuma says. “However, Sox17 appears to be the key player among Sox-F proteins in embryonic implantation.”

The article “Mouse Sox17 haploinsufficiency leads to female subfertility due to impaired implantation” was published in Nature journal Scientific Reports at DOI: 10.1083/srep24171

Tokyo Medical and Dental University (TMDU) researchers discovered the importance of Sox17 protein expression in female mouse fertility. Mice with only one functional Sox17 gene had lower levels of embryonic implantation than controls, causing reduced fertility. This understanding of the role of Sox17 in implantation may help improve human infertility treatment.