The third “TMDU Basic Science Researcher’s Forum” has been held

The third “TMDU Basic Science Researcher’s Forum” has been held

The third Tokyo Medical and Dental University (TMDU) forum for professors involved in basic science was held at the University’s M&D Tower on Saturday, January 11, 2020. This forum is aimed at enhancing the interaction of TMDU’s basic science professors with their alumni who are currently working as professors, etc., in the basic science field outside the university. It was initially proposed by TMDU’s President, Yasuyuki Yoshizawa, who wanted to create a system of collaboration, including the exchange of personnel, that would lead to a mutual strengthening of research capability.

The forum was blessed with good weather, and a total of 62 delegates attended: 28 were from TMDU and 34 from elsewhere.

The first session, held in the Active Learning Room of the M&D Tower, started with an opening address by President Yoshizawa. Then, TMDU Faculty of Dentistry graduate, Dr. Noriko Osumi, who is currently Vice President at the Tohoku University and professor at its Graduate School of Medicine, presented her research on “Understanding epigenetics for health and disease of the next generation.” This was followed by a special lecture by Dr. Makoto Suematsu, the President of the Japan Agency for Medical Research and Development, on “Medical development for healthy longevity under great demographic drift.” The question and answer session was overran with attendees; this is evidence of the strong interest generated by the speakers.
There was also an opportunity to socialize during the second session in the Faculty Lounge of the M&D Tower. Old friends met up, new contacts were made, and relationships were deepened through information exchange on research. As at the last year’s conference, there was also an opportunity to present their research on poster session. Presenters were surrounded with interested delegates, and the session ended on a high note, with several opinions being exchanged on relevant issues. 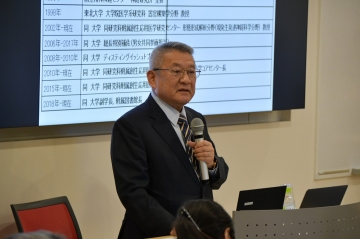 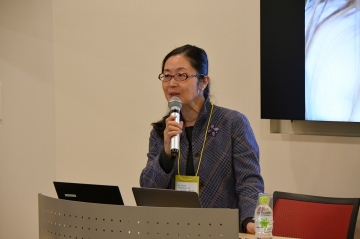 Dr. Noriko Osumi presenting her research in the first session 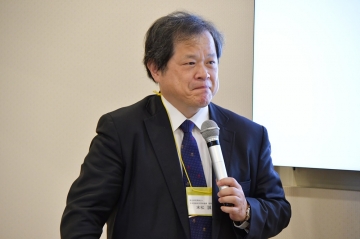 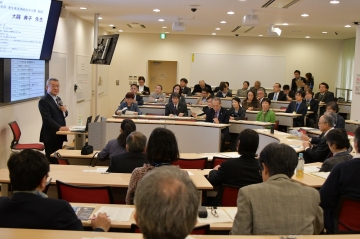