A research group led by Professor Tohru Ikeda and graduate student, Maiko Tsuchiya of the Department of Oral Pathology, Graduate School of Medical and Dental Sciences, Tokyo Medical and Dental University demonstrated that while almost no osteoclast was induced after co-culture of human oral squamous cell carcinoma with mouse-derived macrophages, a large number of osteoclasts were induced from osteoclast-precursor cells destined to become osteoclasts by weak stimulation of osteoclast-inducing factor RANKL, with extracellular vesicles secreted by cancer cells being responsible for this osteoclast induction. The research group also demonstrated that this type of induction of osteoclast from osteoclast-precursor cells is due to a newly discovered mechanism that does not rely on the increased expression of NFATc1, a master transcription factor*1 in osteoclast induction. Furthermore, although the widely used bone resorption inhibitor denosumab (human RANKL neutralizing antibody) was ineffective in inhibiting this type of osteoclast induction, a drug known as cannabidiol almost completely inhibited this induction. The present study demonstrated for the first time ever that osteoclast differentiation from osteoclast-precursor cells may occur via a variety of mechanisms and may provide clues to the development of new treatments for cancer-induced bone destruction. The findings were accepted by the International Journal of Molecular Sciences on December 6, 2019 and were published online on December 9, 2019.

Osteoclasts are cells that resorb bone, maintaining bone metabolic balance and bone health in collaboration with osteoblasts, which form bone. When the balance inclines towards resorption dominance, excessive bone resorption occurs, leading to osteoporosis. Tipping the balance towards bone formation may also lead to diseases involving abnormal bone hardening. It is known that when the macrophage, derived from white blood cell known as a monocyte outside the vessel, is stimulated by the osteoclast-inducing factor RANKL, osteoclasts are induced through signal transmission to the nucleus, which in turn enhances the expression of the master transcription factor NFATc1. For this reason, denosumab is widely used as a treatment for excessive bone resorption due to bone metastasis or osteoporosis.
However, treatments inhibiting RANKL produce side-effects, and suppress systemic bone metabolism to increase the risk of intractable osteomyelitis of the jaw, severely limiting dental treatments, such as tooth extraction, in patients receiving this medication. Moreover, the number of patients experiencing this side-effect, known as medication-related osteonecrosis of the jaw (MRONJ), is rising along with the increase in elderly patients. MRONJ is especially likely to occur in patients receiving treatment for bone metastases, thus prompting a strong demand for the development of a drug capable of specifically suppressing cancer-induced excessive bone resorption without inhibiting systemic bone metabolism. 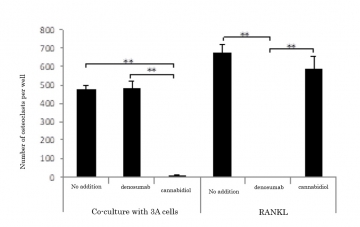 Cannabidiol is used abroad clinically mainly as a therapeutic agent for neurological diseases. Moreover, physiologically produced endocannabinoids are attracting attention for having an important role in regulating bone metabolism. Contrary to expectations, the addition of cannabidiol failed completely to inhibit extracellular vesicle secretion from oral squamous cell carcinoma cells. In addition, removal of extracellular vesicles from the culture supernatants of 3A cells could not completely eliminate the osteoclast-inducing ability, suggesting that not only the extracellular vesicles, but also other cancer cell-derived factors may be at work in oral squamous cell carcinoma cell-mediated osteoclast induction from osteoclast precursor cells. Nonetheless, cannabidiol was found to be able to inhibit the induction of osteoclasts mediated by this type of cancer cells almost completely.
Although the details of the mechanism of osteoclast induction inhibited by cannabidiol are still unclear, the present study also revealed that this mechanism is unrelated to NFATc1 as the master transcription factor for the osteoclast induction, whose expression is enhanced by RANKL stimulation. This suggested a yet unidentified mechanism.
Until now, the increased expression of NFATc1 via the activity of RANKL in macrophages was thought to be the sole route of osteoclast induction. However, the present study demonstrated that RANKL is essential only for initial phase, where osteoclast precursor cells destined to become osteoclasts are induced from macrophages, and that another yet unidentified pathway beginning with osteoclast precursor cells may be involved in osteoclast induction. 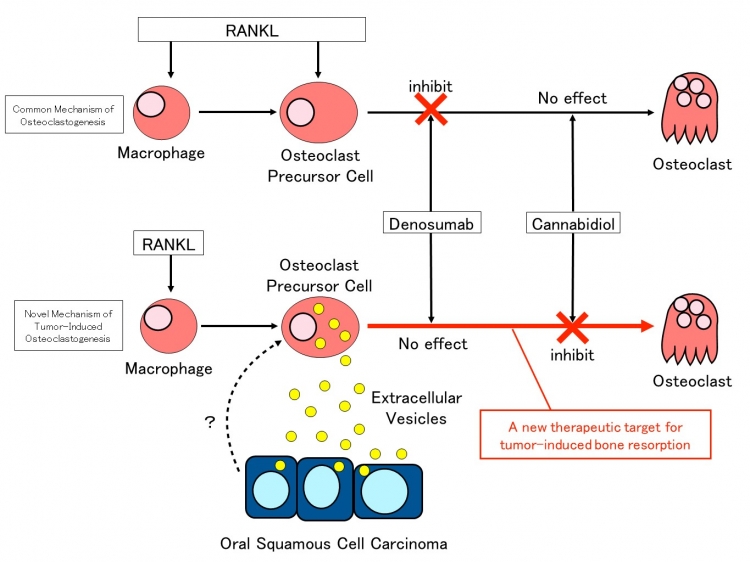 *1 Master transcription factor
A molecule that directly induces the expression of genes essential for cell differentiation and function. 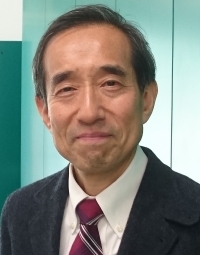