The research group of Assistant Professor Takeshi Yoshida and Professor Shoji Yamaoka of the Department of Molecular Virology, Tokyo Medical and Dental University, in collaboration with the US National Institute of Health (NIH), demonstrated that a viral protein isolated from a wild animal is capable of overcoming the human defense mechanism. This research was supported by the Grants-in-Aid for Scientific Research of the Ministry of Education, Culture, Sports, Science, and Technology and by Nakatsuji Foresight Foundation. The results were published online in the international scientific journal, The Journal of Virology, on January 6, 2020.

The animal protein BST-2, also known as tetherin, is an antiviral defense protein, which inhibits virus release by tethering viral particles to the infected cell surface. However, HIV-1 antagonizes this function of human BST-2 by using the viral protein Vpu*3 and is able to propagate efficiently. On the other hand, immunodeficiency viruses that infect monkeys, gorillas, and chimpanzees, and are considered the ancestral viruses of HIV-1, are known to express Vpu proteins (Fig. 1). However, it has been reported by another research group that the Vpu of chimpanzee immunodeficiency virus (SIVcpz)*4, considered to be the most recent ancestor of HIV 1, does not antagonize human BST-2. Thus, a number of questions remained unanswered about how HIV-1 acquired the capability to antagonize human BST-2. 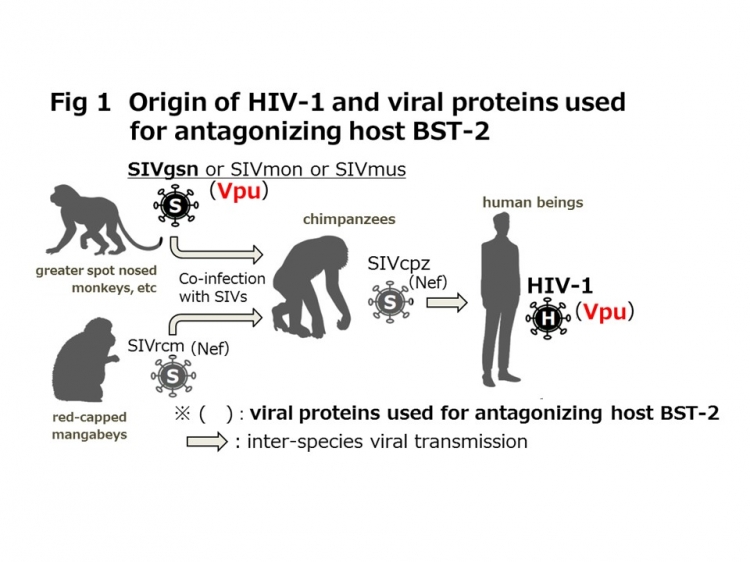 In order to elucidate whether Vpus other than the Vpu of HIV-1 are able to antagonize human BST-2, the research group first examined the immunodeficiency virus of chimpanzee (SIVcpz), which is suspected to be the ancestor of HIV-1, as well as simian immunodeficiency viruses (SIVgsn, SIVmon, and SIVmus), which are suspected to be the ancestors of SIVcpz *5, for their ability to antagonize human BST-2. Vpus of three SIVcpz strains were examined and, as reported by the other research group, all failed to antagonize human BST-2. Although Vpus of the three monkey viruses also showed no antagonistic function, only Vpu expressed by SIVgsn-99CM71 isolated from a greater spot-nosed monkey living in Africa (to be referred to as GSN monkey hereafter) was able to antagonize the function of human BST-2 and facilitate virus release.
The molecular mechanism by which this type of SIVgsn Vpu antagonizes human BST-2 was found to vary from the antagonistic mechanism of HIV-1 Vpu (see Table in Figure 2). Moreover, it was suggested that this SIVgsn Vpu antagonizes BST-2 of its natural host, GSN monkey, using amino acids that are partly different from those used for antagonizing human BST-2 (Table in Figure 2). It seems likely that GSN BST-2 and human BST-2 are antagonized through different molecular mechanisms. 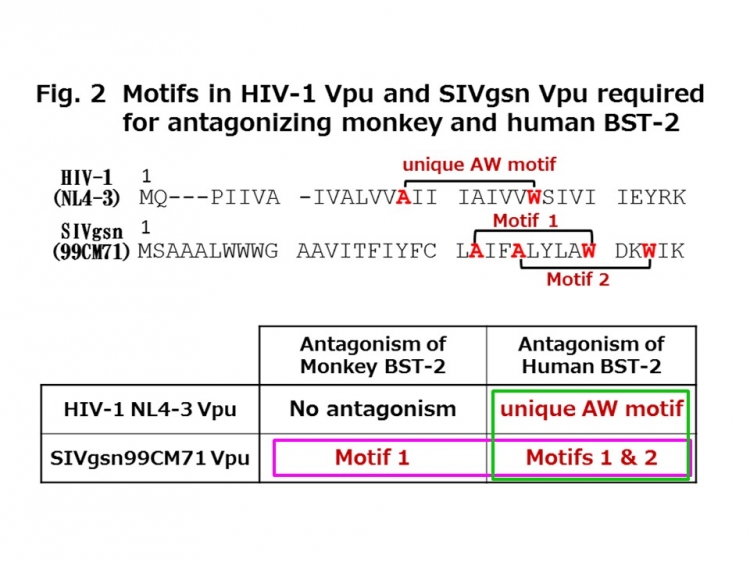 First, the fact that a viral protein isolated from a wild animal was capable of overcoming the human defense mechanism indicates the possibility (risk) of transmission of pathogenic viruses from wild animals to humans.
Second, the possible difference in molecular mechanism of antagonizing human BST-2 between SIVgsn99CM71 Vpu and HIV-1 Vpu indicates the possibility that viruses employ various methods to overcome the defense mechanisms of the human body, which serve as a barrier to viral proliferation. This shows that human beings need to be aware of the reality of the human defense mechanism and take appropriate measures. The present results are expected to be helpful in the evaluation of risks of possible future global outbreaks of new infectious diseases.
Finally, considering that monkeys and humans (Homo sapiens) evolved from a common primate ancestor*6, all differences between contemporary monkeys and humans must have occurred through evolution after divergence of each species. From this view point, the possibility that monkey and human BST-2 are antagonized by different mechanisms suggests that in the course of evolution, the human antiviral protein (BST-2) gene may have undergone evolution, which made it necessary for viruses to change their antagonizing mechanism. Further research should be conducted to elucidate the evolution of antiviral genes in humans.

*1 BST-2
Bone marrow stromal antigen 2, also known as Tetherin or CD317. BST-2 is known to inhibit virus release of a variety of viruses (those with envelope proteins) other than HIV-1, and to be expressed depending on interferon that is induced in response to viral infection.

*2 human immunodeficiency virus type 1 (HIV-1)
HIV-1 is a causative virus of acquired immunodeficiency syndrome (AIDS). It is thought to have emerged about 150 years ago when a chimpanzee virus was transmitted to humans.

*3 Vpu protein
Vpu is a membrane protein expressed by viruses. It is a small protein of 77 to 86 amino acids in length depending on the virus. HIV-1 expresses the Vpu protein, and among simian immunodeficiency viruses (SIVs) there are some strains (SIVgsn, SIVmon, and SIVmus) that express Vpu, and others (SIVrcm) that do not (Fig. 1).

*4 simian immunodeficiency virus (SIV)
As a rule, the three lower-case letters following “SIV” are abbreviations for the name of the primate from which the virus was isolated. (For example, the virus isolated from chimpanzee was named SIVcpz, and that from greater spot-nosed monkey SIVgsn.)

*5 SIVgsn, SIVmon, SIVmus
SIVgsn, SIVmon, and SIVmus are viruses that were isolated from wild monkeys living in Africa, i.e., greater spot-nosed monkey, mona monkey, and mustached monkey, respectively, and all of them have each vpu gene. As shown in Figure 1, SIVcpz isolated from chimpanzees is considered the most recent ancestral virus of HIV 1. Ancestors going back further are unknown, and the vpu gene of SIVcpz is thought to have evolved from one of these three viruses.

*6 Human evolution
It is the course of biological evolution up to the emergence of humans (Homo sapiens) as a distinct species different from all other animal species. Divergence from monkeys living in Africa (superfamily of Cercopithecoidea, including greater spot-nosed monkey) is thought to have occurred 28 to 24 million years ago, and divergence from chimpanzees 8 to 7 million years ago. 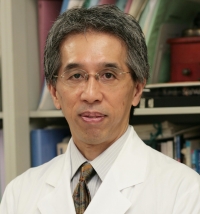