Extracellular aggregation of beta-amyloid peptide is a hallmark of the Alzheimer’s disease (AD) brain; however, Phase III trials have found that beta-amyloid removal does not improve memory or cognition. Attention has therefore shifted to investigating pre-aggregation changes. One such change is the phosphorylation of the protein serine/arginine repetitive matrix 2 (SRRM2), which has been studied in work involving TMDU researchers led by Hitoshi Okazawa. Using mouse models and post mortem AD brains, they confirmed that phosphorylation of SRRM2 occurs before extracellular beta-amyloid aggregation, and that this prevents translocalization of SRRM2 from the cytoplasm to the nucleus. This deficiency of nuclear SRRM2 causes a downregulation of polyglutamine binding protein 1 (PQBP1), a causative gene for intellectual disability. Remarkably, PQBP1 supplementation resulted in recovering altered synapse morphology in the cerebral cortex and reversing cognitive impairment in AD model mice. These results indicate, for the first time, the importance of PQBP1 for synaptic and cognitive functioning in AD, which is important for the development of new therapeutics for the treatment of AD. 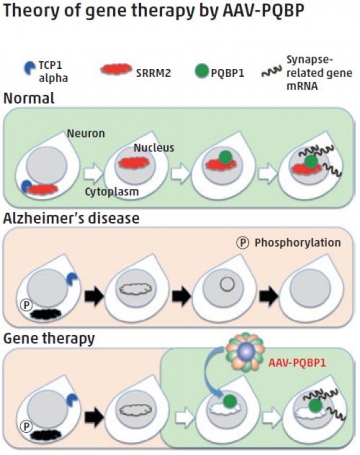 In the Alzheimer’s disease state, the amounts of nuclear scaffold protein SRRM2 and the synapse-gene regulator PQBP1 are decreased. By increasing PQBP1 in neurons, the expression of synapse genes is recovered and cognitive defects improve in Alzheimer’s disease model mice.

Patients with the congenital skeletal disorder acampomelic campomelic dysplasia (ACD) have mutations in their SOX9 gene, which encodes a transcription factor protein that controls cartilage development. Some ACD patients have DNA changes located far away from SOX9, hinting at the existence of important but distant regulatory elements of SOX9 expression.
A research team led by Hiroshi Asahara from TMDU used a range of techniques based on the precise gene editing tool known as CRISPR/Cas9 to closely investigate this upstream region. An enhancer of SOX9 was identified within a DNA sequence that is highly conserved among different mammalian species and whose inhibition by the CRISPR/Cas9 tool reduced SOX9 expression.
Moreover, the enhancer (named as Rib Cage Specific Enhancer, RCSE in this study) functioned specifically in cartilage, and mice lacking this region in their genome had symptoms similar to ACD patients.
Incorporating CRISPR/Cas9 into a strategy to identify proteins associated with gene regulation complexes, the team showed that the STAT3 protein binds to the enhancer to assist its regulation of SOX9. These techniques could help improve the diagnosis of ACD and the identification of potential treatments. 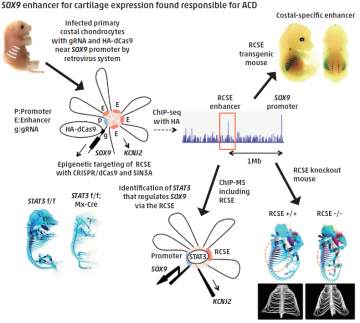 Cut it out: New research reveals key to regulation of TTN splicing in the heart

Dilated cardiomyopathy (DCM) is a disease in which the heart becomes enlarged and no longer pumps blood effectively. An inherited form of DCM (autosomal-dominant familial DCM) is linked to mutations in the RSRSP stretch of the gene RBM20. Understanding the functional deficits caused by the RBM20 mutations is important for developing new DCM treatments. RBM20 regulates splicing of TTN, the gene encoding the largest known protein, titin, which is important for heart muscle function. Patients with DCM caused by RBM20 mutations predominantly produce aberrant titin isoforms.
An international research team, led by Akinori Kimura and Hidehito Kuroyanagi from TMDU, showed for the first time that phosphorylation of the two serine residues in the RSRSP stretch was essential for nuclear localization, which allows RBM20 to interact with TTN pre-mRNA. They generated an Rbm20S637A knock-in mouse, mimicking an un-phosphorylatable mutation found in a well-studied case of DCM. These mice exhibited aberrant titin isoform generation in the heart and developed DCM. Identification of the mechanism for nuclear localization of RBM20 will help guide efforts toward developing therapeutics for DCM patients.

(Left) In the wild-type, the two serine residues in the RSRSP stretch are phosphorylated and the RBM20 protein is localized in the nucleus, where RBM20 regulates alternative pre-mRNA splicing of its target genes so that cardiac isoforms of mRNAs are produced. (Right) In the RBM20 missense mutant with a substitution in the RSRSP stretch, the mutant RBM20 proteins are no longer imported into the nucleus. Pre-mRNAs of the RBM20-target genes are processed into non-cardiac isoforms of mRNAs, which are then translated into non-cardiac protein isoforms, which may lack specialized functions and/or exert aberrant functions. The mutant RBM20 proteins retained in the cytoplasm may also exert aberrant functions.

Numerous types of cancer cells are known to overexpress the EGFR — epidermal growth factor receptor — therefore, targeting the EGFR can provide an efficient method for intracellularly delivering cargo, through a process known as endocytosis. CQTPYYMNTC is a cyclic peptide that mimics the dimerization arm of EGFR and can be used as a targeting moiety to promote cell uptake. Hirokazu Tamamura and coworkers from TMDU have shown that CQTPYYMNTC can be used to facilitate the cell internalization of [KLAKLAK]2, a peptide that induces cell death but shows poor membrane permeability and cancer-cell specificity.
CQTPYYMNTC-mediated endocytosis was successfully demonstrated in EGFR-positive cell lines, and the key role of EGFR was supported by siRNA knockdown in A549 cells. The therapeutic potential of targeting using the peptide loop was demonstrated by treating EGFR-expressing cells with CQTPYYMNTC conjugated to [KLAKLAK]2 through a cleavable linker. The peptide conjugate was shown to affect the viability of EGFR-expressing cells and to induce cell death, highlighting the potential of the system for both cancer-cell targeting and therapeutic delivery. 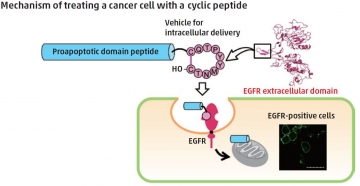 A cyclic decapeptide, which mimics the dimerization arm of the EGF receptor (EGFR), was previously found to be captured into cells. The authors have found the promising potential of this peptide as an intracellular delivery vehicle directed to EGFR-positive cells. The cellular uptake of the conjugated peptide, which was composed of the cyclic peptide, the proapoptotic domain peptide and a linker cleavable with a protease, was evaluated by treatment of EGFR-positive cells. Significant suppression of proliferation by the conjugated peptide was shown in a cell-viability assay.

Dentists usually distinguish between active and arrested caries by visual inspection facilitated by a dental explorer, or radiography. However, these approaches risk damage to teeth or necessitate exposure to radiation, and successful diagnosis requires expertise. Bacteria interacting with carbohydrate on the tooth surface produce acid, and previous studies have shown that tooth pH could be diagnostically useful. However, available pH measuring devices have not been clinically convenient.
To address this, TMDU researchers, led by Yuji Miyahara and Miyuki Tabata, constructed a micro pH sensor from thin wires of iridium oxide. With spatial resolution of 0.3 mm, this device was able to measure the pH of active and arrested caries on extracted human teeth. Active (lowest pH) and arrested (low pH) caries were easily distinguished from each other and from healthy teeth on the basis of validated and reliable pH measurements. The categorization correlated highly with that of a dentist visually inspecting the teeth.
The use of a novel iridium oxide pH probe could aid in the diagnosis of hard-to-reach caries without the need for probing or X-rays.

Stable cell lines that will proliferate over a long time are essential tools for almost all fields of disease research, yet maintaining a non-genetically-modified progenitor cell line (cells that are precursors to other cell types) has proven almost impossible. Common lymphoid progenitors (CLPs), which give rise to all subsets of lymphoid cells, have never been maintained as an unmodified cell line with stable differentiation potential. To address this, an international research team led by TMDU’s Yohei Kawano has isolated uncommitted CLPs from mouse bone marrow and cultured them with a helper-cell line. Using a step-wise optimization process, they developed a specialized growth medium, named KIDMEM, that would support the long-term expansion of CLPs. More than half of the resulting CLP clones could be induced to differentiate into all tested lymphoid cells, and some myeloid cells, both in vitro and in vivo. Successful introduction of gene-expression vectors suggested that more advanced methods of targeted gene expression may also be possible. The ability to obtain large numbers of progenitor cells presents exciting new possibilities in the study of lymphocyte generation from CLPs. 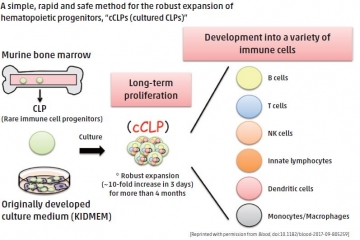 Satellite cells constitute muscle stem cells that might be useful in the treatment of Duchenne muscular dystrophy. However, these cells lose their natural stemness when they are transferred to an in vitro setting, hence there are limitations in using these cells in potential therapies. To solve this problem, Kana Ishii, Chihiro Akazawa and other experts from TMDU investigated the ability of laminin, a prominent extracellular matrix protein that exists in satellite cell niches within muscle, to retain the stemness of satellite cells in vitro. Notably, treatment with LM-E8, a fragment of laminin, promoted satellite cell growth such that stemness was retained. This was due to modified JNK and p38 signaling pathways, both of which control differentiation of satellite cells. When transferred to injured muscle tissue, satellite cells grown with LM-E8 increased the regeneration of muscle fibers, compared to regeneration using satellite cells grown without LM-E8. This method for growing satellite cells that retain their muscle regeneration capabilities may be effective as a therapy for patients with Duchenne muscular dystrophy.

Prostate cancer, one of the most prevalent cancers in men globally, frequently metastasizes to bone. Bone metastases originating from prostate cancer are usually osteoblastic (bone-forming) in nature, and often associated with severe pain and other issues, such as pathological fractures. However, the mechanisms underlying the osteoblastic phenotype induced by prostate cancer are not fully understood.
MicroRNAs (miRNAs) transfer among cells via exosomes for intercellular communication and can modify the tumor microenvironment when secreted by cancer cells. Shingo Sato, Kyoko Hashimoto, et al. screened exosomal miRNAs secreted by a variety of human cancer cell lines and identified hsa-miR-940 released from prostate cancer cell lines as an osteotropic factor.
In vitro, hsa-miR-940 significantly promoted osteogenic differentiation of human mesenchymal stem cells by targeting two genes, ARHGAP1 and FAM134A. Remarkably, even a breast cancer cell line, which usually induces an osteolytic (bone-resorbing) phenotype, produced widespread osteoblastic lesions in a bone metastasis mouse model when engineered to overexpress miR-940. The study suggests that hsa-miR-940 secreted from prostate cancer cells in the bone metastatic microenvironment promotes osteogenesis of mesenchymal stem cells to induce osteoblastic-type bone metastasis.

In the bone metastatic microenvironment, the crosstalk between metastasized cancer cells and the surrounding bone cells is critical for the formation of the osteoblastic or osteolytic phenotype. miRNAs are transferred between cells via exosomes and influence the phenotype of their recipient cells. The present study demonstrated that cancer-secreted miRNAs induced osteoblastic-type bone metastasis through promoting osteogenesis of mesenchymal stem cells.