Progress in research on hepatitis B has been impeded by the lack of cell models appropriate to study the mechanisms by which the virus persists intracellularly. TMDU led researchers have now overcome this problem by developing two hepatocyte cell lines derived from induced pluripotent stem (iPS) cells. These cell lines mirror features of liver cells infected in vivo such as long-term infection without major phenotypic changes and the mass production of infectious viral particles.
The research team led by Professor Yasuhiro Asahina found that the less differentiated of these two cell lines, immature
proliferating hepatic progenitor-like cells, was particularly promising. When the cells overexpressed NTCP (sodium taurocholate
cotransporting polypeptide, the site of hepatitis B virus cell entry), they became highly infected, could be stably cultured, and exhibited typical virus-induced immune responses. These cells should be useful tools for characterizing viral infection, identifying new target molecules, and testing new drugs in the fight against chronic hepatitis B infection.

Cells in CD13+CD133+ fraction can form large colonies expressing HN4Fa (red) and AFP (green). They were stably cultured on feeder cells for more than three months.

The CHADS2 scoring system, which was developed to estimate stroke risk in patients with atrial fibrillation, is also beneficial for individuals without abnormal rhythms, and high scores are associated with an increased tendency for blood to coagulate. However, the lack of a sensitive method to evaluate blood clotting has prevented this association from being fully investigated.
Associate Professor Tetsuo Sasano led a TMDU research team in applying the recently developed dielectric blood coagulometry test, which measures coagulability, and found it to be extremely sensitive in detecting small changes over time in the clotting ability of whole blood. The test enabled the calculation of a highly reducible and reliable coagulation index from blood that had been artificially thinned using heparin, or clotted using tissue factor. This index correlated with the CHADS2 score and moreover, provided additional quantitative information about thrombosis risk. It also demonstrated the anticoagulative effects of drugs such as warfarin, indicating its utility for monitoring the efficacy and safety of anticoagulation therapy. 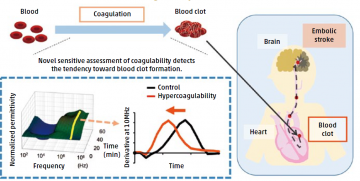 Blood clots, generated by the coagulation of blood, can evoke an embolic stroke. The novel sensitive assessment of coagulability could detect the tendency toward blood clot formation by measuring the change in dielectric permittivity of the whole blood. The less time needed to change the permittivity, the greater the hypercoagulability, resulting in a higher risk of stroke.

Cells of mammalian tendons respond to environmental physical forces by remodeling their extracellular matrix in order to provide resistance to mechanical stress. The transcription factor Mohawk (Mkx) is involved in tendon development, but no Mkx upstream regulators have yet been identified, and the molecular mechanisms by which tendon cells receive mechanical signals are unknown.

Professor Hiroshi Asahara and colleagues centered at TMDU led research to show that Mkx was stimulated by physical exercise or cellular stretching to regulate downstream genes such as proteoglycans and type I collagens, resulting in increased collagen fiber thickening. The transcription factor GTF2IRD1, a candidate Mkx upstream gene identified by functional screening, is usually expressed in the tendon cell cytoplasm. However, under mechanical stretching, it was found to translocate to the nucleus, where it bound to the Mkx promoter region to induce Mkx transcription through histone modification. These findings about the Mkx transcriptional network and its role in mechano-sensing have important implications for tendon repair and future uses of Mkx as a therapeutic target for regenerative medicine. 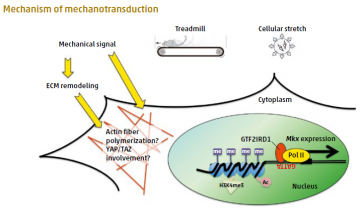 Mechanical signaling by treadmill exercise in vivo, or by cellular stretching in vitro, induces translocation of GTF2IRD1 to the nucleus to promote Mkx expression.

The rapid growth of cancer cells is known to require an increased activity and turnover of proteins, in which a protein-degrading component, the proteasome, is involved. However, it has remained unclear whether the proteasome is required only for the maintenance of existing cancer cells, or also for the emergence of a cancerous lesion. By establishing a transgenic mouse model that was prone to developing pancreatic lesions and expressed a marker for proteasome activity, a team of researchers led by TMDU showed that such activity is indeed essential for the formation of precancerous pancreatic lesions.

Using this mouse model, Professor Shinji Tanaka and colleagues found that an inhibitor of proteasome activity reduced the formation of pancreatic lesions but did not affect ones that already had been formed. Given the high mortality of pancreatic cancer patients because the disease typically is not recognized until at a late stage, the discovery of proteasome involvement during cancer initiation could provide useful markers for earlier diagnosis and improved prognosis of this disease. 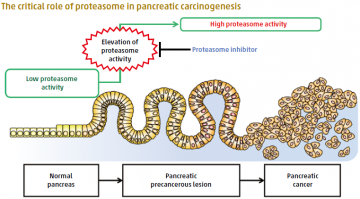 Bone-anchored implants are an important orthopedic and dental treatment. When cells come into contact with implant biomaterials, they produce more reactive oxygen species (ROS), and ROS overproduction can lead to oxidative stress. This reduces the proliferation and bone-forming capability of osteoblasts. Treating titanium implants with ultraviolet (UV) light increases hydrophilicity and removes hydrocarbons on the titanium surface. This improves cellular compatibility and bone-implant integration.

However, how UV treatment affects ROS production in cells exposed to titanium implants remains unknown. TMDU’s Junior Associate Professor Takeshi Ueno and his research team, including colleagues at the UCLA School of Dentistry (USA), cultured osteoblasts on UV-treated titanium surfaces. On these surfaces, cells produced fewer ROS and pro-inflammatory cytokines,
and the level of DNA damage was reduced. Furthermore, the antioxidative capacity was not depleted and ROS production was reduced, even in the presence of an oxidative stress inducer. The findings suggest that UV treatment induces a novel antioxidant capability in titanium.

Cancer stem cells (CSCs) are an obvious target of tumor therapy, but their resistance to chemotherapy and radiotherapy has focused attention on disrupting the niche microenvironment that maintains them. TMDU led
research by Professor Tetsuya Taga and international colleagues used a synthetic polymer-based scaffold to create a mimic of the niche for glioma CSCs (GSCs), and identified extracellular matrix (ECM) and iron as key components of the GSC niche. The team showed that cultured GSCs were supported by a population of differentiated stem-cell progenies expressing ECM and transferrin (a protein involved in iron uptake). Similarly, in tumor xenografts, GSC-derived vascular endothelial cells were found to be a source of
ECM and to behave as a drug barrier would against an experimentally administered anticancer drug. Further evidence that the GSCs organize their own niche was the observation that GSCs enable recruited monocytes to differentiate into protumoral macrophages that store iron. These findings reveal the adaptive capacity of GSCs, which could further the development of cancer therapies. 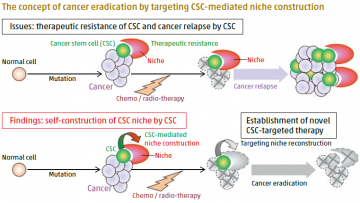 CSCs, a key driver in cancer progression, therapeutic resistance, and relapse are often proposed as a promising target for cancer eradication. As CSCs are maintained by the surrounding microenvironment, called a niche, disrupting the CSC niche is theoretically reasonable as a way to impair the CSC pool and thereby inhibit cancer progression and relapse (upper panel). Notably, we found that CSCs construct their own niche, and thereby adapt at sites where the niche is missing or disrupted. This discovery will hopefully open a new therapeutic path for cancer eradication (lower panel).

A novel role for Sox17 in embryo implantation

Embryonic implantation occurs only when the uterine endometrium is in a receptive state. Ovarian hormones orchestrate multiple signaling events to achieve implantation and establish pregnancy. During implantation, the expression of Sry-related high mobility group box gene-17 (Sox17) is elevated at the embryo attachment site. However, the role of Sox17 in implantation is unknown.

In a new study, Professor Masami Kanai-Azuma and colleagues at TMDU and other institutions examined fertility in mice with a heterozygous loss of Sox17. Mutant females produced fewer offspring, but ovulation, fertilization, blastocyst formation, and oviduct and uterus morphology were normal. Examination of the uterus at the time of implantation revealed fewer implantation sites in mutant females. Implantation also failed when wildtype embryos were transferred to the uterus of mutant females, excluding the possibility that problems with the embryos were responsible. The findings reveal a novel role for Sox17 in uterine receptivity to embryo implantation. 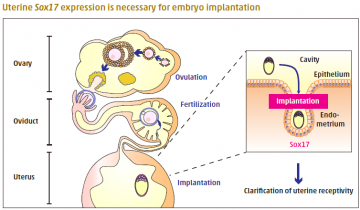 Obstacles have remained for the treatment of bone defects using tissue engineering approaches. In this study, researchers developed a new technique, called cell transfer technology, whereby two types of cells can be attached to a scaffold in patterns that can be precisely controlled. Specifically, osteoblasts and stem cells from tooth ligament were attached via photolithography onto the amnion as a scaffold in overlapping layers in which each layer exclusively contained one type of cell.

Junior Associate Professor Kengo Iwasaki of TMDU led the team in transplanting this engineered structure onto mouse calvarial bone defects. As a result, more rapid bone formation and healing were observed, owing to the transplant closely mimicking native features. The use of the amnion-based scaffold also maintained the integrity of the structure despite folding and cutting, enabling modification of transplants to fit particular defects. 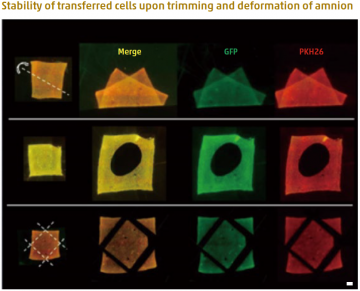 Fluorescence microscopic images of amnion holding double-layered cells after deformation (top), hole-cutting (middle) and trimming (bottom) of the membrane. After double-layered cell transfer, the amnion was folded along the dotted line (top). A circular hole was cut in the center of the cell-transferred amnion (middle). Four corners were trimmed along the dotted lines after double-layered cell transfer (bottom). Despite the deformations and trimming of the cell transferred amnion, the cells stably adhered onto the scaffold material. Green (GFP): First layer cells. Red (PKH26): Second layer cells. Bar = 1 mm