The epithelial-mesenchymal transition (EMT) contributes to cancer progression, as well as the development of normal organs, wound healing, and organ fibrosis. We established a cell-based reporter system for identifying EMT-inducing microRNAs (miRNAs) with a gastric cancer cell line, MKN1, transfected with a reporter construct that contained a promoter sequence of VIM in the 5’ upstream region of the TurboRFP reporter gene. Function-based screening using this reporter system was performed with a 328 miRNA library, and resulted in the identification of miR-544a as an EMT-inducing miRNA. Although miR-544a is already known to be involved in the regulation of CDH1, the mechanism by which EMT occurs remains poorly understood.

We demonstrated that overexpression of miR-544a induces VIM, SNAI1 and ZEB1 expression, and reduces CDH1 expression, resulting in an EMT phenotype. In addition, we found that CDH1 and AXIN2, which are related to the degradation and the translocation of β-catenin, are direct targets of miR-544a. Subsequently, the reduction of CDH1 and AXIN2 by miR-544a induced the nuclear import of β-catenin, suggesting that miR-544a may activate the WNT signaling pathway through the stabilization of β-catenin in the nucleus. Our findings raise the possibility that inhibition of miR-544a may be a therapeutic target for treating metastatic gastric cancer. 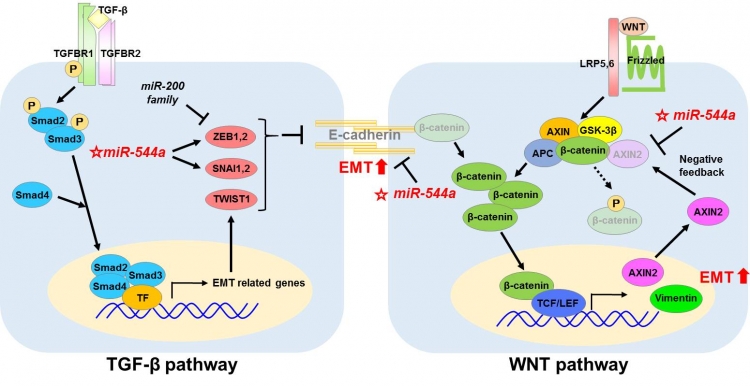 The number of patients with inflammatory bowel disease (IBD) is rapidly growing in Japan. Professor Mamoru Watanabe, chief of the Gastroenterology Department at TMDU, has served as the chairperson of Japan’s national IBD research group since 2007. To provide excellent care to patients with IBD, TMDU established the Advanced Clinical Center for IBD in 2012. During the past 3 years, it has accepted almost 1,000 newly referred patients, and has become one of the largest IBD centers in Japan. Innovative procedures are incorporated into daily clinical practice there. For example, more than 200 small intestinal endoscopies are performed annually, and their usefulness in the management of Crohn’s disease has been reported(1).

Based on this foundation in IBD research, Professor Watanabe led a nationwide study of patients with moderately active ulcerative colitis to examine the efficacy and safety of an oral 4-integrin antagonist (AJM300), which blocks lymphocyte recruitment to the gut from the systemic lymphoid tissues. The drug showed a remarkable clinical efficacy(2).
Through these activities, the TMDU IBD center has played a leading role in clinical as well as basic research in IBD, and is recognized as a center of excellence for IBD in the world. 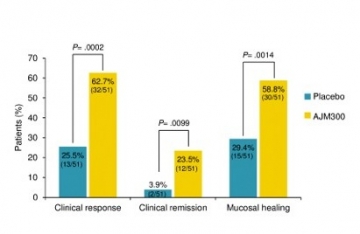 Proportion of patients with a clinical response, in clinical remission, and with mucosal healing at week 8 of treatment with AJM300 or placebo. The patients in the AJM300 group demonstrated a higher rate of improvement compared with those in the placebo group in every outcome.

Fasting to activate macroautophagy not enough to cure Alzheimer’s disease 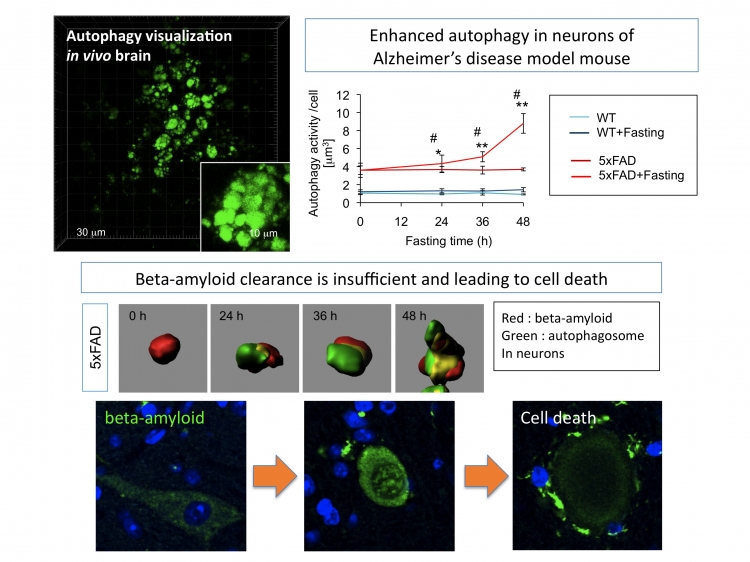 Macroautophagy has been considered a protective mechanism in neurons against various types of neurodegenerative diseases. Activation of macroautophagy by rapamycin or fasting is hypothesized as a therapeutic approach to neurodegeneration, although it is not settled whether autophagy is, in fact, activated in the brain by fasting or not. On the other hand, in Alzheimer’s disease, the autophagosome is suggested as a place for generating beta-amyloid, which accumulates both outside and inside neurons. The questions of the role of autophagy in Alzheimer’s disease and whether fasting induces autophagy are not yet solved.

By using the fluorescent marker protein of macroautophagy and fluorescent beta-amyloid, we directly observed the dynamics of autophagy and the degradation of beta-amyloid in the mice models of Alzheimer’s disease. The results showed that macroautophagy is actually activated IN THE BRAIN as in other organs after fasting, but surprisingly revealed that fasting increased the accumulation of intracellular beta-amyloid in neurons. We expect that this was probably the result of starvation-enhanced endocytosis of extracellular beta-amyloid and the impaired function of macroautophagy in the Alzheimer’s disease brain. Thus, our experimental results caution that exaggerated calorie restriction might lead to the progression of Alzheimer’s disease, even in patients who are overweight, unless they have diabetes and related disorders. 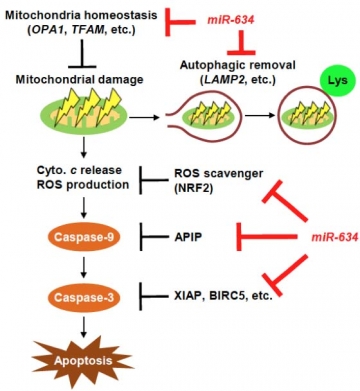 Effective activation of the mitochondrial apoptosis pathway due to the downregulation of multiple genes that are concurrently targeted by miR-634.

Some tumor-suppressing miRNAs target multiple oncogenes concurrently and therefore may be useful as cancer therapeutic agents. Further, such miRNAs may be useful to address chemotherapeutic resistance in cancer, which remains a primary clinical challenge. Thus, a logical target for investigation would be the cytoprotective processes that are upregulated in cancer cells that are resistant to chemotherapy. Here, we report that overexpression of miR-634 activates the mitochondrial apoptotic pathway by directly and concurrently targeting the genes associated with mitochondrial homeostasis, antiapoptosis, antioxidant ability, and autophagy. In particular, we show how the enforced expression of miR-634 enhanced the chemotherapy-induced cytotoxicity in a model of esophageal squamous cell carcinoma, where resistance to chemotherapy remains clinically problematic. Our findings show that reversing miR-634-mediated cytoprotective processes may offer a broadly useful approach to improving cancer therapy.

Solving a 100-year-old mystery: Discovery of a flat medaka mutant shows how 3D body morphogenesis happens in opposition to gravity

A century ago, Sir D’Arcy Wentworth Thompson, a British mathematical biologist, postulated that terrestrial animal body shapes are conditioned by gravity. However, there has been no animal model directly demonstrating how the mechano-morphogenetic processes are coordinated to generate a body shape in opposition to the force of gravity. A unique medaka (Oryzias latipes) mutant, hirame (hir), which means flatfish in Japanese, was isolated using a phenotype-driven mutagenesis screen for mutations that affect organogenesis in medaka embryos.

Due to mutation of the transcriptional co-activator YAP, hir embryos are sensitive to deformation by gravity and exhibit a markedly flattened body. Actomyosin-mediated tissue tension and fibronectin fibril formation are abnormal in hir embryos, leading to tissue flattening and tissue misalignment, both of which contribute to the flattened body. The YAP-knockdown human 3D spheroid also exhibits collapse upon exposure to external forces, which is reminiscent of the hir phenotype.

Together, these findings reveal a novel mechanism behind gravitational resistance in the 3D morphogenesis of a variety of animals, including fish and humans. This was discovered in a multi-institutional research project spearheaded by TMDU Professor Hiroshi Nishina’s group, Institute of Science and Technology Austria Professor Carl-Philipp Heisenberg’s team, and Makoto Furutani-Seiki’s lab from the University of Bath in the UK. 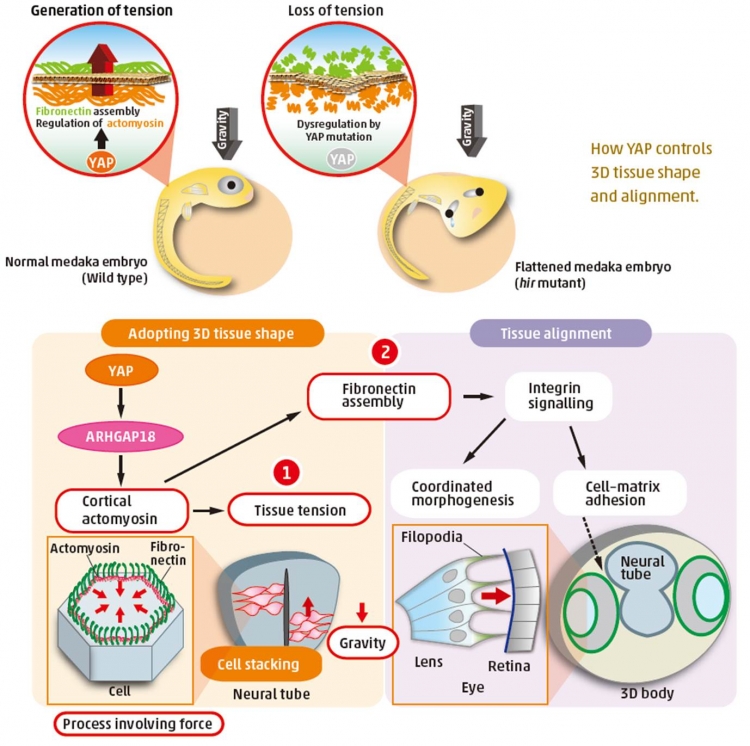 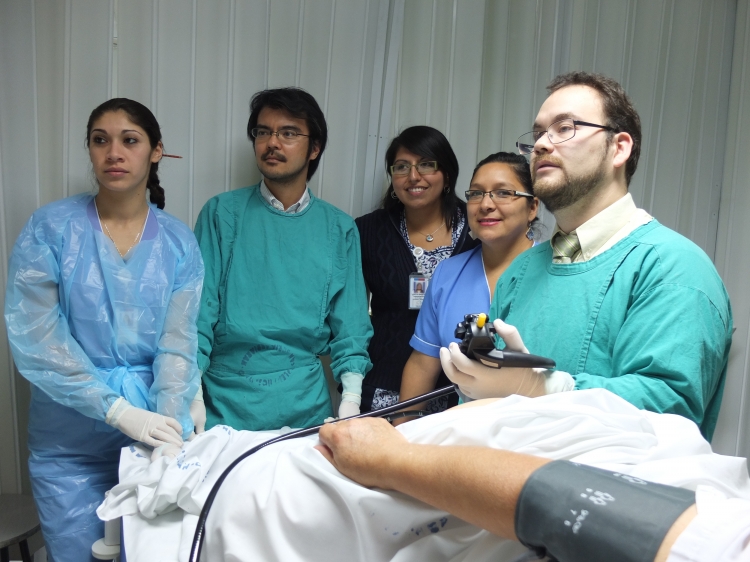 In Chile, mortality from colorectal cancer (CRC) has increased rapidly. To help address this, TMDU was invited to supervise a new project for screening, based on TMDU’s history of collaboration with Chile since 1968. In 2009, the Ministry of Health of Chile, Clinica Las Condes, and TMDU signed a collaboration agreement for CRC screening. TMDU has continuously dispatched several experts in pathology, endoscopy and research, to construct a new national system of CRC screening in Chile.

A project for CRC screening named “PRENEC” was initiated in 2012 after intensive support from TMDU. From June 2012 to July 2014, a total of 10,575 asymptomatic participants were enrolled in PRENEC. Screening detected 107 cases of CRC , amounting to 1.01% of all participants, whereas the detection rate by the previous screening system in Chile was 0.2%. Other indicators also showed the higher quality of the new CRC screening system. Furthermore, most of the CRCs detected in PRENEC were early intramucosal cancers without risks of metastasis, and these lesions were treated successfully by endoscopy.

Ca2+ signals are tightly regulated in time and space, controlling a wide variety of cell functions from cell division to cell death. Both direct observation and manipulation of Ca2+ signals in living cells would be straightforward and effective approaches for investigating the roles of Ca2+ signals. Although sophisticated genetically encoded Ca2+ indicators have been developed to visualize the fluctuations of intracellular Ca2+ signals, efficient genetically encoded Ca2+-controlling tools have been eagerly awaited. We have engineered a blue light-activated Ca2+ channel switch (BACCS), which is composed of a plant photosensitive protein – LOV2 domain – and a regulator of human or Drosophila Ca2+-selective Orai ion channels. The Drosophila BACCS, combined with Drosophila Orai, is a highly efficient Ca2+ photoswitch with a large dynamic range in mammalian cells. We also generated BACCS mutants, which exhibit fast and slow recovery of intracellular Ca2+. With BACCSs, we used light to successfully control NFAT-mediated gene expression in cultured cells and electrophysiological responses in the mouse olfactory system. Thus, BACCS will be a useful optogenetic tool for controlling a wide variety of Ca2+-dependent cellular events, both in vitro and in vivo. 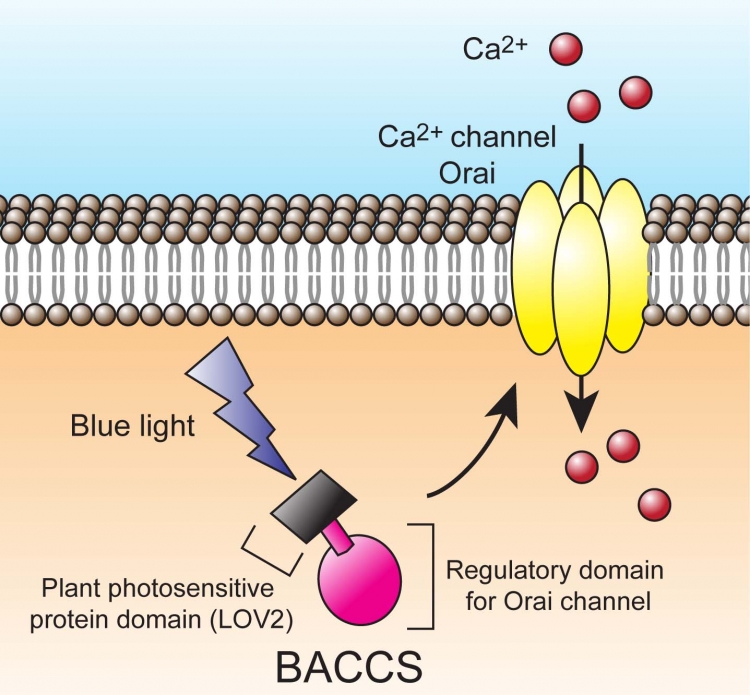 Schematic representation of BACCS. Blue light induces a conformational change of LOV2, which allows interaction between BACCS and Orai, resulting in an influx of extracellular Ca2+.

Irx3/IRX3 is a transcription factor present only in the His-Purkinje system in the heart. It is key to determining the fast and reverse propagation of electrical signals in the ventricle. We found that genetic defects in Irx3/IRX3 were associated with lethal arrhythmias and sudden deaths in both mice and humans, particularly when they occurred during exercise. Sudden death related to exercise occurs in roughly one out of 10,000 individuals with normal hearts. Some genetic diseases, such as long QT syndrome and arrhythmogenic right ventricular cardiomyopathy, are implicated as the cause of sudden death related to exercise. Our data add the genetic dysfunction of Irx3/IRX3, a transcription factor specifically expressed in the His-Purkinje system, as a possible cause of sudden death related to exercise. 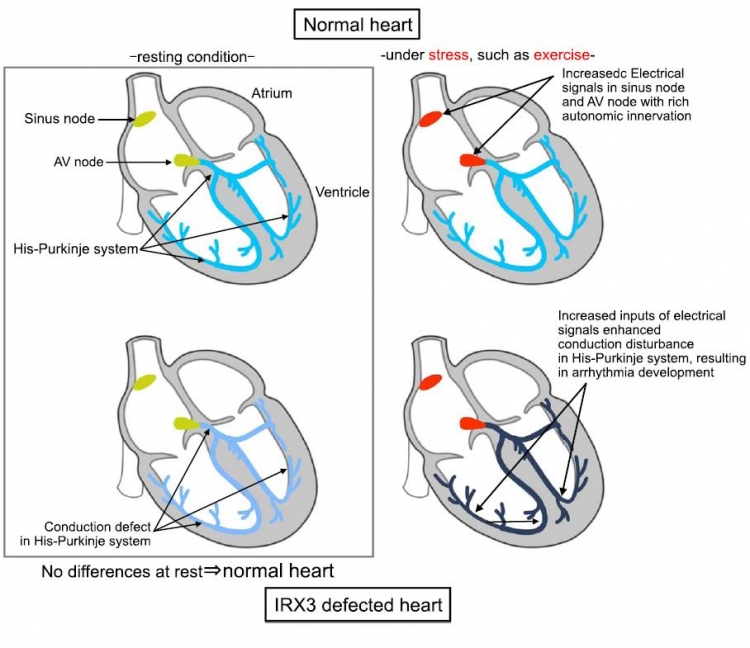 The possible mechanism of exercise-related arrhythmias associated withby IRX3 genetic defects
Upper: normal hearts. Lower: hearts with IRX3 defects. Left: resting condition. Right: under stress, such as exercise.
In the resting condition, the functions of the heart with IRX3 genetic defects (lower left) cannot be distinguished from those of the normal heart. Under stress, such as exercise, increased inputs of electrical signals into the His-Purkinje system manifest as a conduction disturbance, resulting in the development of arrhythmias.