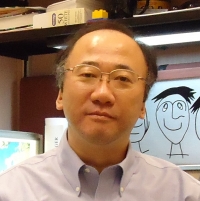 Profile
Dr. Okazawa graduated from the University of Tokyo, School of Medicine where he received his MD and PhD. He performed postdoctoral research at the Max-Planck Institute for Psychiatry in Munich as a staff scientist, and became Assistant Professor in the Department of Neurology at the University of Tokyo in 1994. In 2001, Dr. Okazawa became Head of the Tokyo Metropolitan Institute for Neuroscience, then joined TMDU as Professor in 2003. He became Director of the TMDU Center for Brain Integration Research in 2014.

Q. You focus on protein phosphorylation in the brains of Alzheimer’s disease patients and mouse models. Please give us a brief overview of your latest findings.

A: In an earlier study, our team found that a protein called MARCKS was phosphorylated very early in mouse models, before the formation of amyloid plaques or cognitive impairment. The phosphorylation was also maintained in mouse models throughout the disease and detected even in autopsied brains of Alzheimer’s disease patients. We noticed that verstimulated or dying neurons released HMGB1 protein, which phosphorylated MARCKS via activation of TLR4 and downstream kinases. This led us to propose that HMGB1 is a promoter of an ultra-early phase (phase 0) pathology of Alzheimer’s disease.

Q.What made you focus on targeting the early stages of the disease?

A: Therapies that break down amyloid plaques have been shown to be ineffective in clinical trials, possibly ecause the plaques had already formed years before symptoms appeared. This means that early intervention or prevention are crucial to success, so we looked at molecular mechanisms that occur early on in the disease. Moreover, nobody has actually found the molecule that proves the existence of an ultra-early phase (phase 0) pathology of Alzheimer’s disease before extracellular myloid plaque (senile plaque) formation. MARCKS is the first case of such molecules directly indicating the existence of a phase 0 pathology of Alzheimer’s disease. 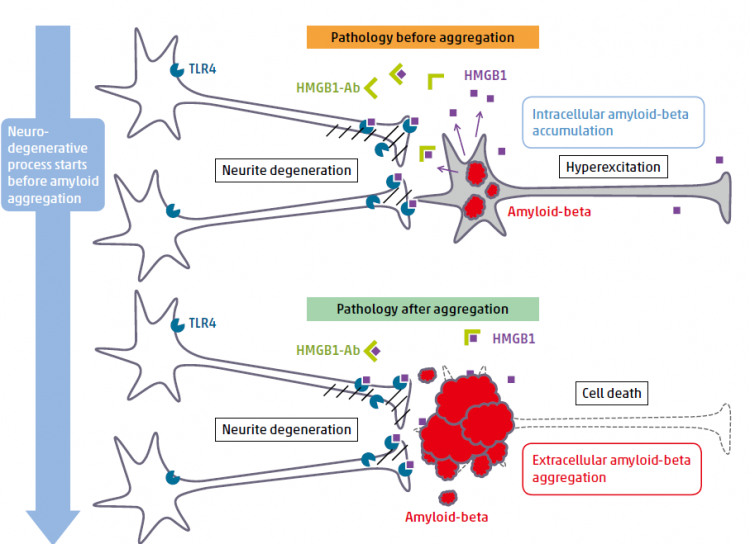 HMGB1-antibody therapy targeting ultra-early phase (phase 0) pathology
Before amyloid aggregation, HMGB1 is released from neurons that accumulate intracellular amyloid-beta or that are hyper-excitatory. HMGB1 binds to TLR4 and activates MARCKS. The signal induces hosphorylation of MARCKS at Ser46, which leads to degeneration of neurites. Administration of anti-HMGB1 antibody prevents such pathology before amyloid aggregation.

Q.Please elaborate the implications of your results.

A: We noticed that patients with the highest HMGB1 levels in their spinal fluid experienced particularly rapid progression of dementia. This finding suggests that HMGB1 could be a target for preclinical therapy. To test this, we developed an antibody against HMGB1, injected it into a mouse model before the onset of the disease, and found that it prevented cognitive impairment. This means that anti-HMGB1 antibody could delay the onset of Alzheimer’s disease even when plaque accumulation has already started. This is very exciting because it indicates that people who will develop Alzheimer’s disease in the future could be treated.

Q. Do you have plans to expand on this work?

A: Naturally, we are now developing human antibodies against HGMB1 to be used in clinical trials. If everything goes smoothly, we will start trials in five years. Development of biomarkers is another plan. A high level of HMGB1 in spinal fluid may be linked to the quick development of dementia.