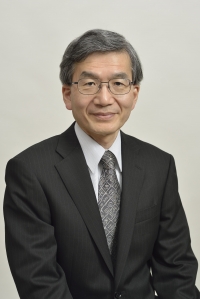 Profile
Dr. Karasuyama graduated from the Faculty of Medicine at TMDU and completed his postgraduate work at the University of Tokyo, where he received his MD and PhD. He performed postdoctoral research at the Basel Institute for Immunology in Switzerland and the University of Tokyo. He became Head at the Tokyo Metropolitan Institute of Medical Science and joined TMDU as Professor and Chairman of the Department of Immune Regulation in 2000. He assumed the role of Executive Director and Executive Vice President in 2014.

Q. Please explain your findings on basophil responses in allergy.

A: I have been working with my TMDU colleagues to illustrate a novel role for mouse mast cell protease-11, or mMCP-11, originating from basophils, in triggering immunoglobulin E-mediated delayed onset allergic skin inflammation in vivo. Interestingly, while mMCP-11 deficiency had no impact on murine basophil development or homeostasis, the loss of mMCP-11 influenced allergic inflammation by decreasing the swelling of affected skin, lowering microvascular leakage and recruiting fewer leukocytes. Basophils likely migrate to regions of skin insult, are stimulated by allergens, and produce mMCP-11, which then recruits more leukocytes, including basophils. We showed that proteolytic mMCP-11 does not recruit leukocytes directly but instead triggers formation of cleaved products that then function as chemoattractants in a G protein-coupled receptor-mediated manner. Therefore, mMCP-11 represents an important effector molecule in allergic inflammation.

A: Basophils mediate immune responses. While both basophils and mast cells contain proteases in intracellular granules that they release when activated, the profiles of proteases differ, implying exclusive functional roles. In ddition to that, circulating basophils differ from tissuelocalized mast cells and originate from distinct cell lineages. The functional activities of basophil proteases have not been fully understood, and this further motivates our study.
Recently, our research on the mast cell tryptase mMCP-11 found that it is predominantly produced by basophils rather than mast cells, despite its name. Separately, we have published a study reporting that basophils play non-redundant roles in murine mmunoglobulin E-mediated delayed onset allergic skin inflammation. Our current research examined the molecular link between these phenomena.

Q. How do your research interests align with the focus areas at TMDU?

A: There is a significant focus on medical research at TMDU and well-established facilities for supporting animal studies in research projects like ours. TMDU also emphasizes fostering academia–industry collaborations that promote translational medicine. 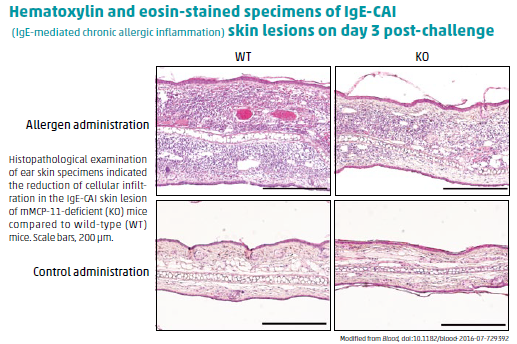 Q.What are future directions for your research?

A: While our research takes significant steps toward better understanding basophil functional activity, the molecular mechanisms underlying inflammatory responses and leukocyte recruitment should be studied further. In particular, it is important to identify the target protein of mMCP-11 and explore the possible interaction of mMCP-11 with other molecules derived from leukocytes.

Q. What are the therapeutic implications of your findings?

A: Our research illustrates new connections between basophil proteases and how they exacerbate inflammatory responses. Potential therapeutic strategies may target the chemoattractant roles of basophil protease products to mitigate allergic responses.