The immune cells of patients with autoimmune diseases such as systemic lupus erythematosus (known commonly as lupus) are not properly regulated, causing the body to react against its own cells and tissues. In the case of lupus, this occurs in response to the TLR7 protein mistakenly stimulating a type of white blood cell (B lymphocytes, also called B cells) to produce antibodies against a self-antigen (the body’s own TLR7 ligand). This results in the infl ammation of joints, skin, and internal organs. Lupus development is prevented by the action of CD72, an inhibitory protein of B cells. Takeshi Tsubata and colleagues at TMDU investigated how this occurs, using a recombinant protein composed of a portion of CD72 and B cells from mice that lack CD72. Their work revealed that CD72 selectively binds to the ligand of TLR7, stopping B cells from producing autoantibodies, and preventing lupus symptoms. However, crucially, CD72 did not affect the production of antibodies to other antigens. This suggests that changing the CD72 function may control lupus development without affecting other immune responses. These findings have important implications for understanding the pathophysiology of lupus and the development of novel therapies for this disease. 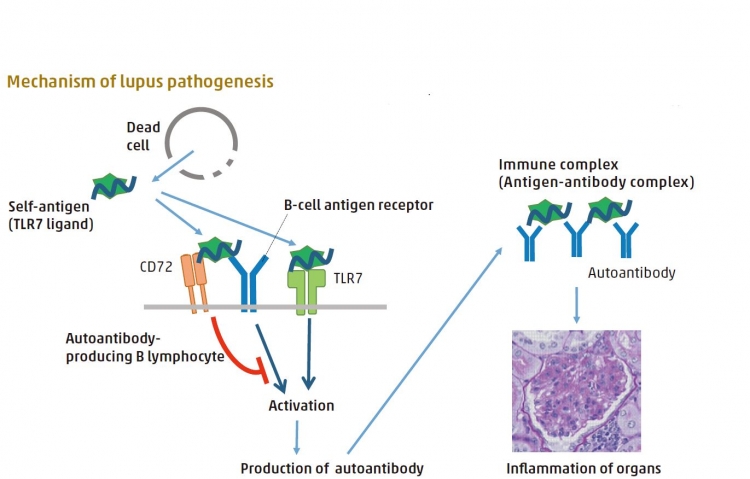 The body’s own (self) TLR7 ligand stimulates autoantibody producing B lymphocytes to produce autoantibody to the self-TLR ligand, which causes tissue damage. This stimulation is mediated by B-cell antigen receptor and TLR7. CD72 interacts with self TLR7 ligand and inhibits cell activation, thereby inhibiting the process of lupus development.

Developmental processes in the body are tightly controlled by signaling molecules and transcription factors, which regulate gene ex-pression. The protein IKAROS (encoded by the IKZF1 gene) is one such transcription factor that controls the development of blood cells. While IKZF1 mutations are commonly found in leukemic cells in children, heritable IKZF1 mutations in germ cells are associated with immune disorders. However, the specific effect of these mutations on patient phenotypes remains unclear. Tomohiro Morio of TMDU led research to investigate IKZF1 mutations in nine patients from six unrelated Japanese families by sequencing all their protein-coding genes. The patients carried various IKZF1 mutations, but most shared the same immune disorder and a deficiency of B lymphocytes. Several also had autoimmune disorders. Analysis of their mutant IKAROS proteins showed that all were unable to correctly bind DNA, and had an abnormal nuclear localization. This work extends the IKZF1 mutation spectrum, and reveals a role for IKAROS in human immunology and the development of blood cells.

Heterozygous germline IKZF1 mutations cause hematopoietic abnormality and autoimmunity. A: Pedigrees of families A to F. B: Schematic of IKAROS protein domain and location of its mutations. Black boxes labelled by number indicate zinc finger (ZF) domains.

number of neurological diseases are caused by an increase in the number of repeats of short lengths of DNA motifs known as microsatellites. One such disease, SCA31, is associated with damage to the cerebellum, which is the part of the brain involved in balance, coordination, and speech. To understand how the repeats cause disease, an international team including TMDU researchers led by Kinya Ishikawa studied their eff ects in a fruit fl y model of SCA31.
The authors demonstrated that TDP-43 and other RNA-binding proteins (RBPs) act as chaperones to regulate the formation of toxic RNA aggregates. Furthermore, these RBPs markedly inhibit expression of toxic proteins derived from SCA31 repeat RNA in fruit fly models. Surprisingly, these RNA/RBP interactions regulated not only the RNA folding but also the aggregation propensity and toxicity of RBPs in fruit fl y models of motor neuron disease. Thus, it appears that functional crosstalk of the RNA/RBP network regulates their own quality and balance, suggesting a convergence of pathomechanisms in microsatellite expansion disorders and RBP proteinopathies. It is hoped that controlling this crosstalk could be a therapeutic strategy for various neurological disorders. 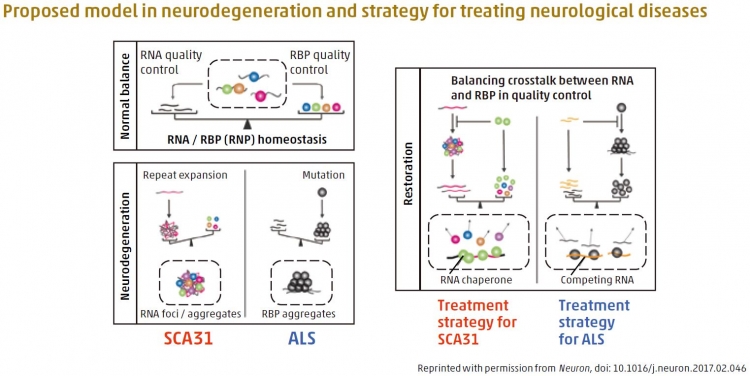 The authors built a new hypothesis that certain RNAs and their binding proteins (RBPs) normally have a balanced state (“homeostasis”), which seemed to be disturbed in some of the devastating neurological diseases such as ALS and cerebellar ataxias (SCA31). Restoring this balance may make these diseases treatable. For example, RNA repeat expansion overload in SCA31 was re-balanced and cured by putting RBP in SCA31 fly model.

Conducting polymers conduct electricity, and they have the advantages of low toxicity and flexibility, which make them suitable for use in biological systems as biosensors. Tatsuro Goda and colleagues at TMDU exploited the ability
of conducting polymers to chemically receive a “graft” of biomolecules, such as proteins or sugars, into their building blocks to detect human influenza virus. Current influenza virus diagnostic methods are limited by time, sensitivity, cost, and complexity of use. However, early detection is key to the prevention of pandemics, which cause up to 500,000 deaths worldwide each year. The team synthesized conducting polymer films based on the PEDOT polymer. They then used the chemical process glycosylation to introduce a type of sugar that could recognize and specifically bind to human influenza virus. This binding was detected
by measuring small electrical changes, enabling the virus to be identified at a level of sensitivity two orders of magnitude higher
than conventional techniques. The potential to mass produce this approach could allow onsite viral detection, which would be particularly beneficial in remote areas. 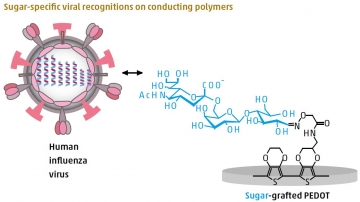 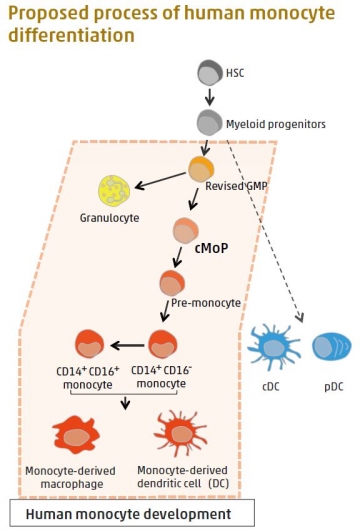 Monocytes and monocyte-derived macrophages cause a variety of inflammatory disorders, including metabolic syndromes and tumor development. Monocytes, a type of white blood cell, arise from hematopoietic stem cells (HSC) via sequential intermediate progenitors in the bone marrow. Progenitors are biological cells that differentiate into a specific type of cell. In mice, a common monocyte progenitor (cMoP), which is restricted to the monocytel ineage, has been identified. A TMDU research team led by Toshiaki Ohteki found human cMoP as CLEC12AhiCD64hi cells in umbilical-cord blood and bone marrow. The human cMoP can produce both CD14+CD16– and CD14+CD16+monocytes. The presence of cMoP within the conventional granulocyte-monocyte progenitors (GMP) population suggests that conventional GMPs are actually a mixed population of genuine GMPs and other progenitors. This finding not only sheds light on human monocyte differentiation, but also on possible therapeutic applications that target cMoP and monocytes.

The action of chewing stimulates the central nervous system and affects cognitive functions such as learning and memory. However, the precise mechanisms underlying these effects have remained obscure. Now, a team led by Takashi Ono and Tomoki Nakashima of TMDU linked reduced chewing during development to reduced neuron formation and activity, and reduced synapse formation in the hippocampus. The researchers created an in vivo model of reduced chewing during evelopment by feeding a powdered diet to juvenile mice. The changes in hippocampus morphology and neuronal activity were related to a decrease in levels of a key regulator of neuronal development, brain-derived neurotrophic factor, and were associated with impaired spatial learning and memory in behavioral tests. These findings support a functional link between chewing and cognitive function during development, thus highlighting the importance of addressing, particularly in children, problems such as malocclusion that may make chewing difficult. 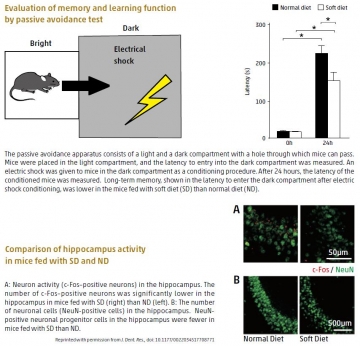 Cellular stress in tissues and organs leads to senescent, transformed or damaged cells, which can impair tissue function or tumorigenesis. However, the molecular mechanisms that act to maintain tissue and organ homeostasis during cellular stress remain largely unknown. Hiroshi Nishina led a TMDU-centered research team which showed that activation of the protein YAP in damaged mouse liver cells promotes their selective elimination. This activation was induced by inactivation of the Hippo pathway, which regulates organ size and cancer formation. The damaged cells migrate into the hepatic sinusoids, undergo apoptosis and are engulfed by Kupffer cells. In contrast, YAP activation in undamaged cells leads to proliferation. The findings indicate that YAP plays a role in emergency stress response by maintaining tissue homeostasis through the elimination of injured cells, highlighting a new role for YAP in tissue dynamics.

A team led by Hiroaki Takeuchi and Shoji Yamaoka of TMDU identifi ed a protein, MELK, required for the HIV-1 to effi ciently infect the cells it attacks. HIV-1 is the most common form of HIV, the virus that causes AIDS. The team found that MELK, which is produced by the infected cell, is necessary for correct removal of the protein coat around the HIV-1, an early stage in the viral life cycle that is essential for infection to proceed efficiently. The study further revealed that MELK alters the protein coat by attaching a chemically active modification through specific phosphorylation of the capsid at serine-149 to promote its removal. These findings not only provide insight into the early stages of the viral life cycle, but also suggest that MELK is a potential new target for anti-HIV treatment. 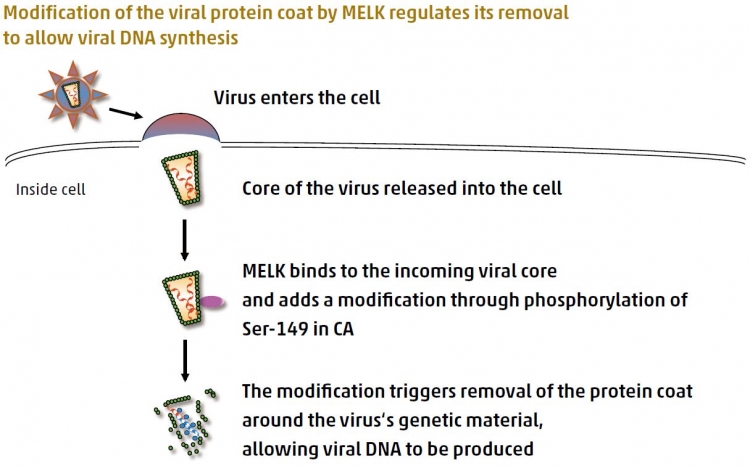 Shortly after HIV-1 entry, MELK produced by the target cell regulates removal of the protein coat (the capsid, CA,which is an important part of the core of the virus) by adding a modification at a specific location. This regulated coat removal promotes optimal production of viral DNA, allowing the infection process to proceed efficiently.