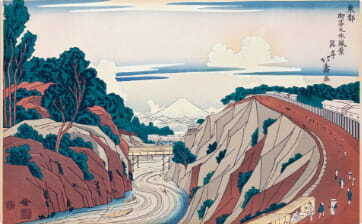 View of the Eastern Capital Edo - Ochanomizu (woodblock by Shotei Hokuju)
This landscape woodblock print shows a view towards Ochanomizu, TMDU’s home. The vantage point is from Manseibashi, and the scene is depicted by Shotei Hokuju, who was one of Katsushika Hokusai’s pupils. The Ochanomizu district is on the right, with the Kanda River in the center and the Surugadai area on the left. The slope on the right-hand side is Shoheizaka, and halfway up the slope is Taiseiden, the temple of Yushima Seido. Shoheizaka School can be seen at the top of the slope. In 1872, Tokyo Normal School was established on this site. In 1930, after the school was relocated, its site was handed over to TMDU. The covered bridge that spans the river is the Kanda Josui aqueduct, which carried water from Hongo to Kanda. The Suidobashi area is behind the aqueduct, and Mt. Fuji can be seen in the far distance.
1890 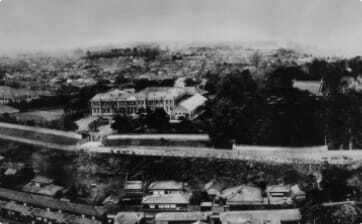 Ochanomizu - Yushima
This panoramic photograph of the Yushima area was taken in 1890 from atop the construction site of the Holy Resurrection Cathedral, which is known as Nikolai-do (St. Nicholas Cathedral) in Japanese. The Tokyo Higher Normal School (now the University of Tsukuba, and relocated to Ibaraki-ken) is in the center. On the left is Tokyo Women’s Higher Normal School, which is now Ochanomizu University, and which has since been relocated to Hongo. TMDU now occupies these schools’ former sites. On the right is the roof of Yushima Seido’s temple, Taiseiden, which is still standing. The wooded area in the center of the photograph is part of the campus of Tokyo Imperial University, which is now known as The University of Tokyo.
1897 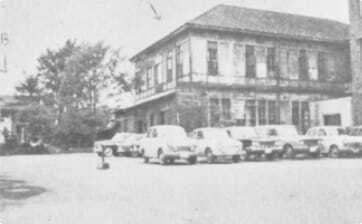 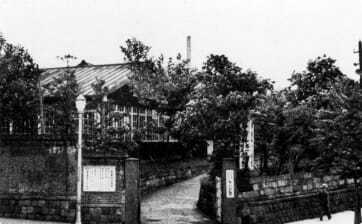 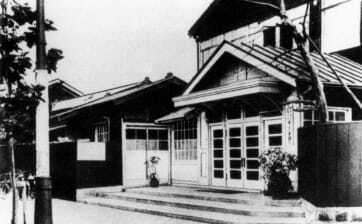 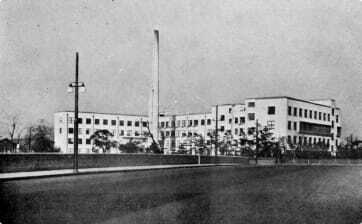 Main Building, Tokyo Medical and Dental University (now Building No.2)
This photo was taken from Hijiribashi Bridge in 1935 and shows the old section of Building No. 2, which was then the main building of Tokyo Medical and Dental University. Groundwork for the building began in 1934. Construction was completed the following July and the purification ceremony for the new building was held in August.
1952 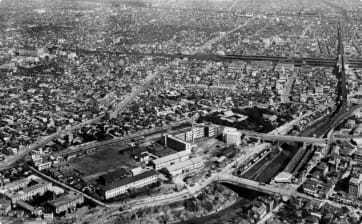 Tokyo Medical and Dental University and Yushima area
This aerial photograph was taken circa 1952, during the period of post-war reconstruction, and shows the university buildings and Yushima area in the foreground. The Dental Hospital is near Ochanomizu Bridge and Juntendo Hospital, in the bottom of the photo. The Medical Hospital is in the center of the university complex, and the university’s main building is on the Yushima Seido side, near Hijiribashi Bridge. On April 1, 1951, Tokyo Medical and Dental University was formally approved under a new system, and the Research Institute for Dental Materials was established as the university’s first affiliated research institute.
1982 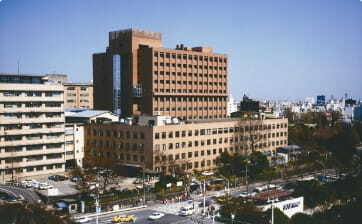 New Dental Wing, Dental Hospital
In 1982, construction of the new wing of the Dental Hospital was completed, and it is seen in the photo to the left as the tall building in the center. A number of specialist therapy departments, such as for elderly care and disabled patients, were added to this wing in subsequent years. By the end of fiscal year 2011 there were four departments and 27 outpatient clinics in the Dental Hospital, and it is equipped and staffed to treat a wide range of oral- and maxillofacial-related illnesses.
1991 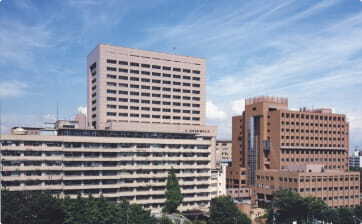 New Medical Wing (A wing), Medical Hospital
The Medical Hospital, on the left side of the photograph, saw completion of its A wing (shown) in 1991, and its B wing in 1996. As of the end of fiscal year 2011, the Medical Hospital had 32 clinics, a Trauma and Acute Critical Care Medical Center, and 28 central clinical facilities. The specialists on staff are prepared to treat the most serious conditions and illnesses and collaborate across departmental boundaries to conduct diagnoses and implement courses of treatment.
2009 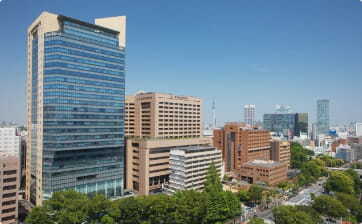 M&D Tower, Anchoring a Panoramic View of Tokyo Medical and Dental University
Construction of the 26-story M&D Tower (far left), the second building devoted to Medical and Dental Sciences at TMDU, was completed in 2009. M&D Tower enables a fusion of basic and clinical research that spans traditional research boundaries through its utilization of open labs and other approaches designed to bring forth and sustain medical and dental collaboration.
2011 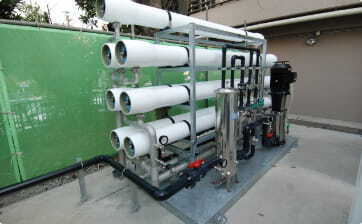 Groundwater Membrane Filtration System
The photos to the right show the filtration system that was installed in 2011 to treat water from a well that was originally dug on Yushima campus in 1968 and repaired in 2011. The groundwater membrane filtration system will ensure a stable water supply in case of emergency, and plans are underway to bottle water from this well with reference to the legend of “Ochanomizu.”
PAGE TOP